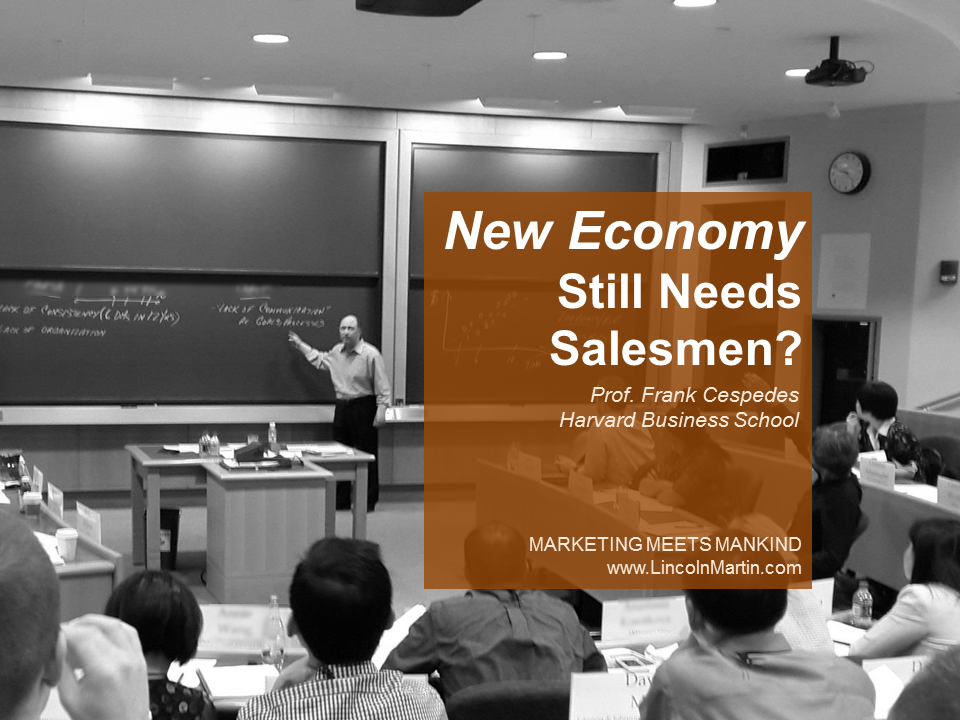 Frank Cespedes is one of the best and most creative senior lecturer at Harvard Business School. He’s the leading authority on strategy, sales and marketing. Frank is one of our best mentor.

The research is an eye opener for growth hackers, social innovators and marketing professionals.

Perhaps it’s time for a re-think of “Death of a Salesman.” After two decades of talk about the “new economy” and the “disruption” of certain professions by the Internet, you might think that sales as we know it is as stale and outdated as Willy Loman — a function that has been “disintermediated” by the digital revolution.

In fact, reports of the death of sales are not just exaggerated; they are wrong. To paraphrase a line from Arthur Miller’s play, “Attention must still be paid.” The sales force remains a force. True, the digital impact on business has been significant and, in some industries, revolutionary. But companies that view sales as just part of the plumbing do so at their peril. Consider:

It’s easy to see why many people are surprised. Online retail sales in the U.S. are now nearly $300 billion. That may sound like a lot, but it’s just 6 percent of total retail sales. And like every other technology trend in history, the growth rate has started to decrease and flatten out. In the top 30 consumer-goods product categories (which account for 97 percent of total e-commerce sales), online growth rates of more than 100 percent annually just a decade ago have slowed to 10 to 15 percent over the past few years. Projections indicate that e-commerce’s share of retail spending (about half of which, by the way, goes to the online adjuncts of brick-and-mortar retailers) will be less than 20 percent by 2030. So, a lot of people may “like” a Facebook entry and tweet frequently. But 140 million people actually buy stuff at Walmart weekly, and that one retailer sells more annually than all websites combined.

Given this reality, a more ominous trend has emerged. Organizations myopically focused on the Internet lose sight of the importance of linking sales and strategy, which requires moving an organization from its present position to a desirable but inherently uncertain future position. The path from here to there is both analytical (what are our objectives, where do we want to “play,” how can we achieve competitive advantage) and behavioral (the coordinated efforts of people across functions that enable effective selling to happen). But many executives have been inept at aligning their expensive sales resources with new digital realities, often lumping online responsibilities into existing business units or simply misunderstanding the impact of digital on sales tasks.

A prime example is car sales. Relatively few vehicles are bought online. But about 90 percent of Americans research the purchase via Edmunds.com or other online sources before going to a dealer. The average car shopper now spends more than 11 hours online, checking out prices and competing offers, and only 3.5 hours offline, including trips to dealerships. Does this mean the car salesperson is dead? No. This change in buying behavior puts more emphasis on selling and what new information the salesperson can add during the customer encounter. As one auto executive put it, “Our salespeople have to be better at closing the sale on the spot; they usually have only one shot, and there’s no warming-up period anymore.” Thus, selling by salespeople, not just clicks, remains central but within a dramatically different buying process.

Consumers should care about this for reasons that go far beyond getting a good deal. Companies’ abilities to make better use of their resources are important for society, not only shareholders. It spurs productivity, and productivity spurs growth. Beyond that, based on analyses of labor productivity data and interviews with executives, research at Harvard Business School about competitiveness recently looked at various “middle-skills jobs”– those that require a high-school education plus some additional certification but less than a college degree.

The researchers examined the impact of these jobs on helping companies succeed globally and helping Americans earn rising wages and an improved standard of living. Compared to other middle-skills categories examined, jobs in “technical and sales management” had the highest aggregate value to U.S. business and are also among the highest in career lifetime value. Further, positions in “sales management,” executives report, are among the hardest to fill.

So it’s important for both policy makers and business leaders to understand sales realities. The real story is the realignment, not replacement, of selling and sales tasks due to the digital revolution. Selling is hard, more so today than ever before, and it’s always in a state of flux. But selling, no matter how much a firm uses social media or other digital developments, won’t be effective and economically productive if it isn’t linked to a coherent strategy, appropriate incentives, and flexibility in the sales force as the market environment changes. In business you can’t make that link if you are not clear about the differences between hype and reality when it comes to buying and selling. Success starts with that awareness, not with the technology.

Frank Cespedes is the MBA Class of 1973 Senior Lecturer of Business Administration at Harvard Business School. He has run a business, served on boards for start-ups and corporations, and consulted to many companies around the world. He is the author of six books, most recently “Aligning Strategy and Sales: The Choices, Systems, and Behaviors that Drive Effective Selling,” and many articles in Harvard Business Review, The Wall Street Journal, California Management Review, and other publications.