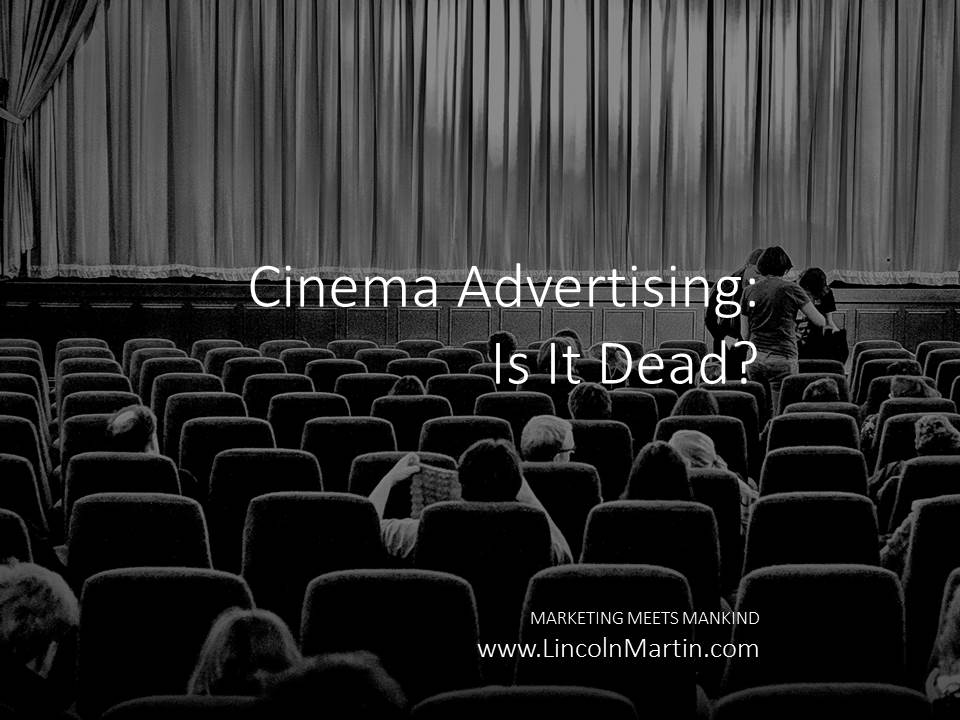 Cinema Advertising: Is It Dead?

How cinema advertising can become an effective brand awareness tool and call-to-action.

If there is one activity that people love doing more than entertaining themselves, it is entertaining themselves without having to spend a fortune. Don’t we all dream of a grand vacation at the Bahamas, or eating out at 5-star rated restaurants? Yes, most of us (if not all) do, but budget constraints often lead us to postpone those plans for “another time”, which sometimes takes years, decades and, for some, a lifetime. Going to the movies, however, is highly accessible and easy on the pocket. Cinemas are almost everywhere, and the experience of going to the movies are getting better (gone are the days of boring, passive movie dates) as new technologies like laser 3D, 4DX and IMAX get more popular in a greater number of movie houses.

In anticipation of a visual treat, movie goers, usually young, affluent, and well educated consumers, are always attentive and engaged. Once they have occupied their seats, it is seldom that they will roam around the movie house or chat with friends before the movie actually starts. This fact makes cinema advertising a viable marketing opportunity. Cinema advertising allows companies to capture a focused audience through multiple consumer touch-points. And if you think that people will choose to skip the pre-show and delay entering the cinema until the opening credits, well, a recent study commissioned by the Cinema Advertising Council shows that patrons are not just comfortable with cinema advertisements, they actually love and look forward to it!

Brands have always found success by advertising in the latest digital platform such as Google, Buzzfeed, Mashable, Taboola, Facebook, or even the traditional magazines, billboards, radio and TV, but advertising in cinemas offer additional perks that other channels will find difficult to match – a “focused sensational brand experience” with a pop-corn.

Because of a cinema’s entertainment facilities, like bigger screens and more powerful sound systems, cinema advertising affords companies unmatched creativity. They can launch visual campaigns that are given more justice when shown in cinemas. Most cinema ads come out as impressive as the movies that they precede, to the enjoyment of the captive audience.

Cinemas also give companies a longer advertising spot. When TV channels only give 30 seconds of airtime, cinemas can give an entire minute. As a result, cinema ads run a fuller storyline, and incorporate more impactful visual and acoustic elements.

Based in industry research, 42% of consumers who are moviegoers have a stronger emotional attachment to films than televised, radio and magazine contents. The impact of cinema advertising is also observably high, with an average 71% total awareness and 88% correct brand association. While some may argue that TV has an indubitably wider reach, studies show that cinema advertising can more effectively impart a brand’s message to an audience.

Moviegoers, as said above, are highly engaged to the experience. People who go to the movies have made the conscious decision of frequenting a movie house and actually paying for what they are about to watch. Being so, they are remarkably less distracted than TV viewers, who may pay attention to other household chores or elements other than the TV.

With digital projection in cinemas and digital production, brands can project their ads at the movie theatre without having to make film prints on 35 mm film. Though priced at approximate twice television ads on a CPM basis, cinema advertising proves to be cost efficient if one considers recall research and length of exposure.

For best results, cinema advertising efforts can be combined with other allied advertising platforms. For example, companies that advertise at theatres can have their ads appear on the theatre’s mobile-based application for booking seats. Some cinemas also have interactive pre-show games that extend to the users opportunity to win prizes. Incorporating a company’s ads into these platforms can drive more interest and response to their messages. Cinemas have been consistently receiving rave reviews from movie-goers about pre-show games.

Cinema advertising is here to stay and will only get better. In the future, with the advent of new cinema technologies like 4DX and laser IMAX, movie goers should see more interactive and attractive cinema ads. The cinema experience itself is evolving – now, there is a notable increase in the number of luxury cinemas, resto-cinemas or movie theatres especially for kids. Cinema advertisers will find more opportunity to share more specialized messages in these emerging settings. There has also been a gradual rise in the number of companies that premier their ads in cinemas even before showing it on any other channels. This has been made possible by the rise of high-definition televisions that has aspect ratios consistent with cinemas. This has made producing multi-purpose (i.e. for TV and cinemas) ads more encouraging for brands around the world.