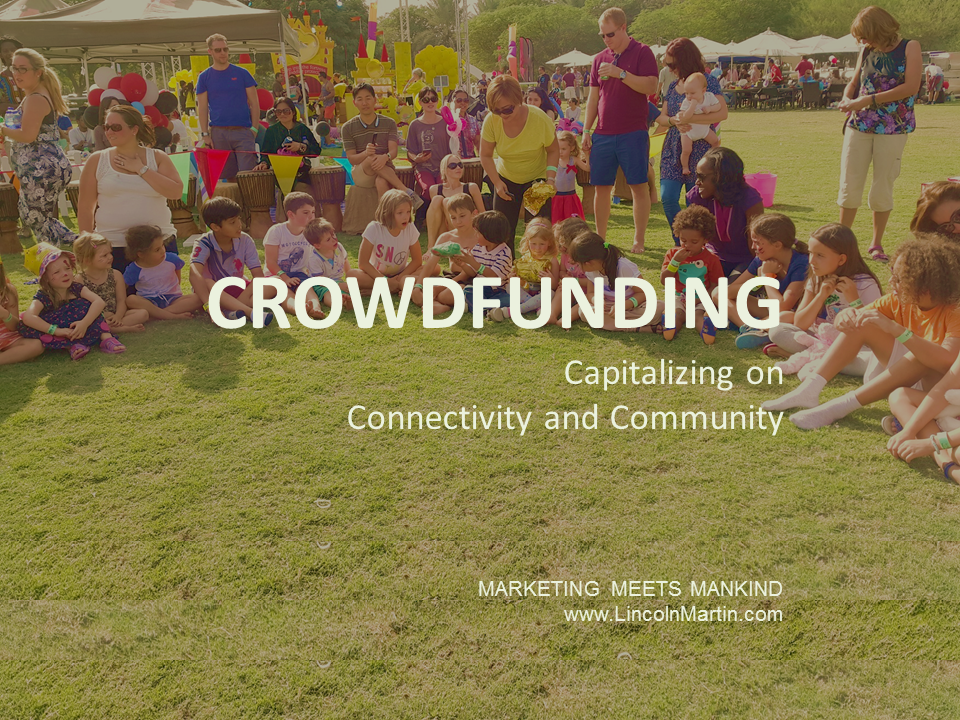 Crowdfunding: Capitalizing on Connectivity and Community

Crowdfunding opens inroads into the development and success of a startup project or social change initiative as it unravels the intricate fund sourcing process characteristic of traditional capital raising approaches.

Since the early 1700s, micro-financing has represented an opportunity for small-scale, start-up ventures to receive funding necessary for their development and realization. Micro-financing may have taken different forms and media, from the time of Jonathan Swift (dubbed as “the father of microcredit), Nobel Peace Prize Laureate Prof. Muhammad Yunus (founder of Bangladesh-based Grameen Bank) to this day and age of social and global integration via the Internet, but its essence and core remains practically intact.

A funding method that has gained notable traction in the past years is crowdfunding. In spite of its relative novelty, its underlying principles are in fact parallel to that of micro-financing, with the addition of modern Internet innovations that provide wider exposure and a more intense rate of amplification. Indeed, dedicated online channels and platforms have made it possible to raise capital through the collective effort of friends, family, existing and potential customers, and investors. Crowdfunding leverages the online presence and network of a large number of individuals, which gives a project or an initiative an exponentially greater extent and coverage.

How is crowdfunding different from other forms of funding?

The traditional approach to raising capital entails, first creating a business plan, conducting market research and manufacturing prototype products or rendering sample services, then selling the idea to a certain set of potential investors, commonly wealthy individuals, banks or venture capital institutions. While a lot of businesses have started this way, a major drawback of this set up is that the number of prospective investors is limited, and the opportunities to sell an idea to the appropriate financier at the right time are restricted.

Crowdfunding takes away the intricacy of the customary process of searching for and presenting to potential investors. It heavily leverages the power of online connectivity and community facilitated by myriad dedicated crowdfunding sites have started operating. These platforms give the proponent a single channel through which he can construct, showcase and share business resources – a fact that notably veers away from the investor-shopping model of the traditional approach. What this means is that instead of the proponent knocking on the individual doors of potential investors to sell an idea, he can make it accessible to all of the members of an online community with a click of a button.

Whether you are managing a start-up company, non-profit organizations, SMEs, social enterprises or a school project, crowdfunding offers a wide gamut of advantages compared to traditional models of business financing. Because it highly capitalizes on online connectivity and community, anyone who chooses to launch a crowdfunding campaign can potentially enjoy a more extensive visibility, a broader customer base and an access to ideas and responses of a greater number of people.

Starting a business is no mean feat, let alone finding the right investor at the most opportune time. Instead of giving a lion’s share of one’s time to fulfilling the requirements of traditional financing entities during incubation period, project proponents can turn to crowdfunding sites to present their initiative. Not only will it be available to a considerably larger number of people, initiatives exposed through crowdfunding sites can be reinforced by a wide range of default add-ons, like videos, presentations, testimonials, rewards programs and real-time counters, to name a few.

When one showcases a project or initiative online, it will be available for appreciation or scrutiny of a vast number of individuals. The proponent can use the feedback coming from the site members to gauge his project and to ascertain which elements need fine tuning. When the public begins to commend and actually support a project, either through compliments, funding or media coverage, it is a proof and a validation that the project has notable merits and has the potential to gain ground – and this information is instantly accessible to its proponent.

The people who support a project can potentially be its early adopters and brand advocates. They believe in the project enough to stake their money and their opinion on its perpetuation and development. These early adopters are vital to the success of a crowdfunding campaign, as they will most likely speak about the project with their contacts outside the online site, share news and stories about the initiative and even promote it through their individual social networking channels.

A project can gain press coverage or mentions through crowdfunding sites. It can be picked up by a popular news station, a blog or even by a print publication. Affording media attention to an initiative is an effective way to introduce it to potential backers and supporters outside the proponent’s network. As a project’s exposure increases, so does its potential to capture the interest of new investors. Brand awareness is one of the key factors to a successful crowdfunding campaign.

Crowdfunding opens inroads into the development and success of a budding project or initiative. It streamlines the fund sourcing process and gives proponents more time to concentrate on improving and exposing the project rather than on completing repetitive paperwork and administrative tasks characteristic of traditional capital raising approaches. With the scope and relevance of social media and dedicated sites growing faster than ever before, crowdfunding is seen to continuously gain popularity and acceptance as a legitimate investment platform.

Need to raise capital? Want to know how we can integrate crowdfunding to your business? Email us:  ems @ LincolnMartin.com